What to Know About 3G Sunsetting [Updated June 2022]

Learn how 3G sunsetting will affect your IoT deployment, and how you can transition to other networks.

What is the 3G Sunset?

20 years after its commercial launch, major telecom providers are preparing to sunset their 3G networks. They’re doing so to free up both spectrum and infrastructure that will power the faster 4G LTE and 5G networks that are currently being deployed around the world.

That means that any cellular-connected device that connects to 3G networks will become inoperable.

This isn’t the first time that older technology has been deprecated. Most cell carriers moved away from 1G in the late 2000s. That’s why you don’t see those giant brick-like cellphones anymore.

Major cellular providers have either already sunset their 3G networks, or are planning to by the end of 2022. Here are the sunset dates for the major U.S.-based carriers:

The Particle team provided more insight into the progress of the AT&T 2G/3G sunset in mid-June 2022, using insights from our distributed fleet to identify patterns and prioritize devices for replacement.

As of June, the AT&T sunset in the USA was still in process after a brief lull. We observed a marked decline in 3G coverage and signal quality in mid-late February and a gradual plateau throughout May.

In the first half of June, Particle observed a strong acceleration in AT&T’s decommissioning of its 3G network. At this stage, 80% of U.S.-based Particle 2G/3G devices were no longer connecting to AT&T, an almost 30% increase from June 1.

All signs are pointing toward this trend continuing, potentially bringing the AT&T sunset to completion in the next few weeks.

Particle has also been closely keeping watch over T-Mobile’s USA 3G sunset, observing that T-Mobile is still maintaining the majority of its 2G/3G infrastructure. 2G/3G devices with T-Mobile network availability will migrate automatically.

However, T-Mobile’s coverage in the US is not equivalent to AT&T’s, so many devices will not have coverage available and will go offline. Particle is estimating as many as 30% of 2G/3G devices will have no fallback coverage with T-Mobile networks.

According to Ismael Sotelo, a Technical Support Engineer at Particle, the AT&T sunset is finally underway, and its pace is picking up.

Ismael pointed out that this change is not only affecting the number of towers available, but is also impacting the signal quality from both AT&T and T-Mobile.

“If we assume a ‘good’ tower has at least 35 percent signal strength, according to our RF characterization metrics, 86 percent of all AT&T 2G/3G towers had a good signal before the sunset,” Ismael said. “Now, only 70 percent of the towers provide a ‘good’ signal. This number is quickly decreasing.”

As of mid-April, nearly half of the 2G/3G devices Particle is tracking are connecting to T-Mobile towers. The pace at which AT&T’s networks are dropping devices has rapidly increased since March 2022. 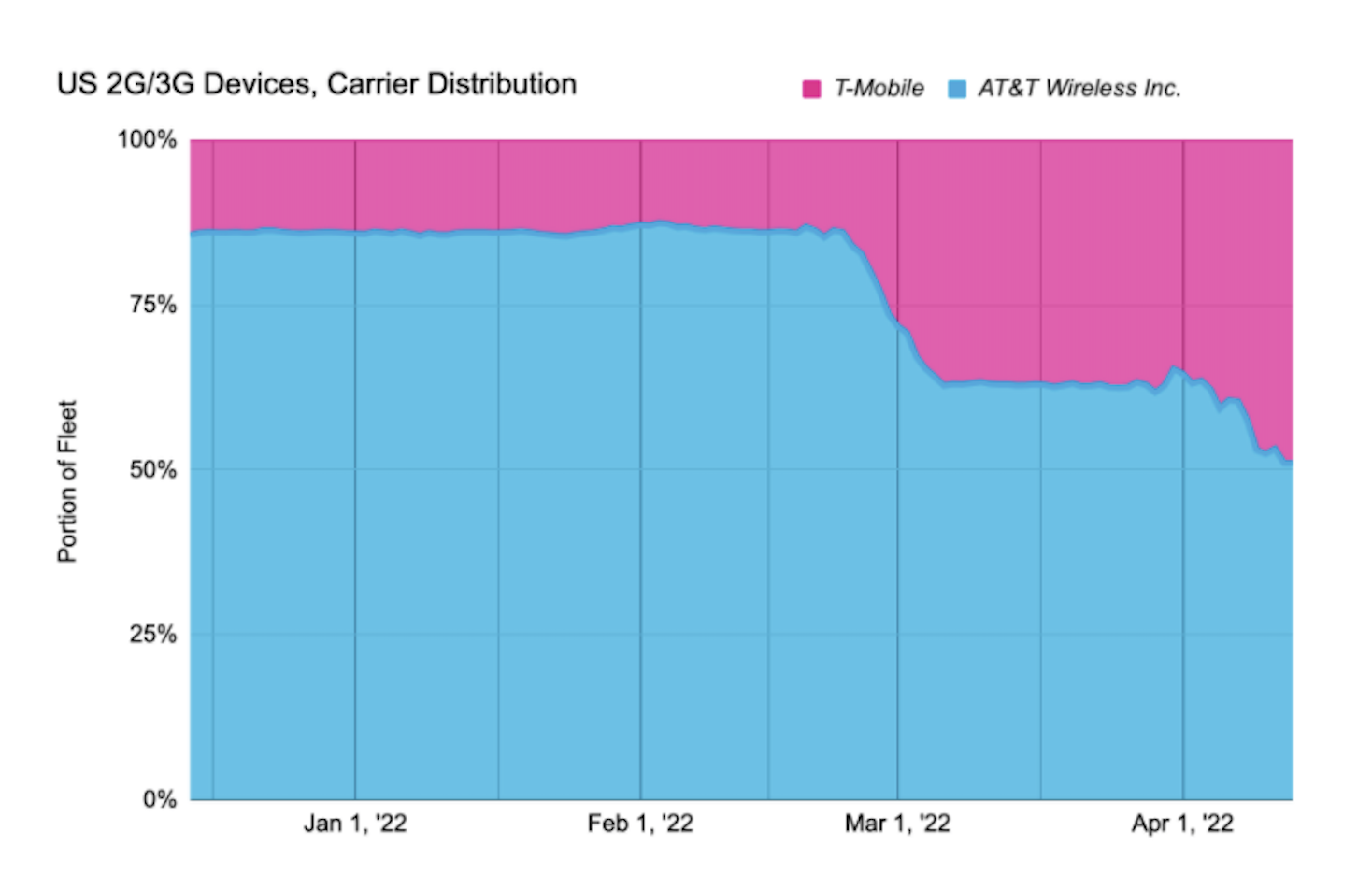 Despite AT&T’s announcement of a February 2022 sunset, the actual process has been much more gradual. Carriers typically don’t make this information available to smaller fleet operators. Particle has insights into connectivity across our customer base, and can give you a much more proactive way to prioritize and plan for migrations based on up-to-date data.

What Does the 3G Sunset Mean for IoT Deployments?

3G is a core cellular IoT technology. Many devices that comprise the IoT, from home alarm systems and smart thermostats to fleet management devices and industrial machinery, rely on 3G networks.

If your devices rely on 3G technology, the sunsetting of 3G networks across major carriers means one of two things:

Most cell carriers have been communicating with customers about the 3G sunset for the last few years. Your IoT partner should also have been preparing your deployments for a transition away from 3G.

“If you’re a Particle customer, you knew about this a long time ago,” JT said. “We’ve been working to facilitate a transition to LTE for our customers for a while now.”

It’s also important to be mindful of the risks and rewards that the 3G sunset will bring for your IoT projects.

“Chances are, with the new technologies being rolled out, you’ll see improvements in battery life, data speeds, and bandwidth,” JT said. “The risk comes in when you have to refit your devices with new modems. That means new certifications, firmware, and hardware.”

How to Transition Away from 3G Networks

If your IoT deployment relies on 3G networks for connectivity, you should have a plan in place to transition away from it and onto another network. Here’s a checklist you can follow to ensure you’re not missing any key steps in

Of course, you could choose to do nothing. But as JT says, that means your IoT product just becomes a T.

What to Do If You're a Particle Customer

For Particle customers, our team has provided extensive documentation on what you should do to transition your fleet away from 3G. You can find that documentation here.

You could do this all yourself. Or we can handle it.

Particle handles the hard parts of cellular connectivity, like firmware upgrades, certifications, and SIM management, so you don’t have to.