Particle Mesh update — a note from the CEO

Particle is discontinuing development of Particle Mesh, our OpenThread-based mesh networking solution, and will no longer be manufacturing the associated Xenon development board. Particle will continue investing in its other “Gen 3” products, the flagship cellular (Boron) and Wi-Fi (Argon) product l...

Particle is discontinuing development of Particle Mesh, our OpenThread-based mesh networking solution, and will no longer be manufacturing the associated Xenon development board. Particle will continue investing in its other “Gen 3” products, the flagship cellular (Boron) and Wi-Fi (Argon) product lines. Read more below on the reasons why and the upcoming deprecation timeline, or watch a recording of our live stream Q&A below.

Particle’s mission is to make it possible for anyone from an individual developer to a large-scale enterprise to develop and bring to market an IoT product by wrangling the complexity of connectivity. With the Spark Core, Photon, and Argon, your IoT products could connect to the cloud via Wi-Fi in minutes. With the Electron and Boron, cellular connectivity for IoT no longer required deep networking expertise and a rolodex of connections at major telcos. When we added 802.15.4 mesh networking to our roster as the next layer of connectivity for IoT, we believed the technology and timing was right.

After one year in the field, we are making the difficult decision to end the development of Particle Mesh. We know the investment we asked you to make and we are inspired by what you’ve built with Particle Mesh. Unfortunately, the decision boiled down to weighing the major investments necessary to make mesh networking totally seamless and invisible against the realization that 802.15.4 mesh networking turns out to not be the right solution for most of the customers who wanted to use it.

This decision doesn’t affect our commitment to our “Gen 3” products, which are powered by a Nordic nRF52840 chip in a Feather form factor. We will continue to develop and support our flagship cellular (Boron) and Wi-Fi (Argon) product lines, and will continue to invest in our Bluetooth Low Energy support for local communications between devices.

Manufacturing of the Particle Xenon will stop, but here are some ways you can keep using yours.

For those that have purchased Xenons, our only Mesh-specific product, we will be sending you a store credit; watch for an email in the next few days. If you purchased through a third-party distributor, please see here.

Particle Device Cloud will continue to support setting up new Particle Mesh devices through the end of 2020, and the 1.6.x release of Device OS in March will be the last release to include support for Particle Mesh. Continue reading below for more details on the deprecation roadmap, ways to continue your own exploration of mesh networking, and context on how we arrived at this decision. And join me on a livestream Q&A this Thursday (1/30/2020) where I’ll be answering your questions.

Why we decided mesh networking is not for Particle today

When we began development on Particle Mesh in late 2017, we were beginning to see that our customers’ IoT products don’t exist in a vacuum. More and more often, our customers were looking to connect their products not just to the cloud via Wi-Fi and cellular connections, but to other nearby devices — typically to build out low-power wireless sensor networks around their core products. We saw that, by doing so, those customers were taking on a big new technical challenge; they were getting into the business of managing remote wireless networks without any good tools available. That looked like a great opportunity for us to help.

However, while that opportunity is real, we ran into two barriers that keep us from delivering on our promise with Particle Mesh. They are:

Let’s explore each of those in a bit more detail.

1. Mesh networking is complex and hard to abstract.

Before we launched our Wi-Fi and cellular product lines in 2013 and 2015, respectively, those technologies were very inaccessible for IoT. However, they were already in widespread use for laptops and smartphones. We didn’t need to invent any new networking technologies to make it possible to build a Wi-Fi or cellular connected IoT product; we just needed to redesign the whole experience around IoT. Our goal was to make it so that you didn’t need to have any deep expertise in wireless networking to be able to build an IoT product; the networking layer should be abstracted so that your product “just works.”

Our goal with Particle Mesh was the same. Particle Mesh is built on top of OpenThread, the only IPv6, open source, IoT-friendly mesh networking protocol available – and we saw an opportunity to create an “it just works” experience on top of it. OpenThread was originally developed to support Google Nest smart home products, and had recently become available for companies outside of the walls of Google Nest. The Thread Group was interested in seeing OpenThread used outside of the smart home and in commercial contexts, where most of our customers operate.

But since we were the first ones taking OpenThread in that direction, and because it was and still is a new technology, we discovered the ways in which it wasn’t ready for us. There were three key areas where the current state of mesh networking technology presented hurdles: manufacturing at scale, deployment at scale, and reliability at scale. Critical requirements like configurability on the manufacturing line, roaming between networks, and expected power budgeting were just not available in the current iteration of the mesh protocol.

In addition, we came to realize that building a proper network management solution that would meet our expectations for simplicity while being powerful enough to support large-scale deployments would be a massive undertaking, deserving of an entire company on its own. As we made plans for our 2020 product roadmap, we couldn’t justify dedicating all of our engineering resources toward a massive “moonshot” that is still exploratory in nature at the expense of our core platform for cellular and Wi-Fi connected products.

It’s 2020, and you’re looking to build a local wireless network of IoT devices. What are your choices? You’ll probably consider the following three paths:

a.) Use Bluetooth Low Energy to connect a handful of wireless sensors within a range of 100-300 feet.

b.) Use LoRa or another sub-GHz radio to connect wireless sensors that are further apart or are separated by obstacles and barriers (walls, floors, etc).

c.) Use 802.15.4 mesh networking (primarily Thread, but also Zigbee and other protocols) to construct a large-scale wireless network with many nodes that can rebroadcast messages across the network.

We were excited about Thread-based 802.15.4 mesh networking because of its inherent resilience – the fact that, in a well-functioning network, if any individual node goes down, the network self-heals. We care a lot about reliability and that seemed like a killer feature to us.

But in practice what we found is that our customers would be better served by BLE or LoRa. Most of our customers are using a very small number of nodes in a network, which means that BLE is sufficient (and much less complex). And other customers are operating in environments like factories or basements where 2.4GHz radios just don’t have the necessary range and LoRa would be a better fit. For example, one customer wanted to implement mesh in industrial refrigeration units. The 2.4GHz radios don’t have long enough range or the right physical characteristics to transmit through the refrigerator wall. While the intention of Particle Mesh was to be a solution for industrial use cases that needed resilient, device-to-device communications, in the end it could not meet the needs for our customers.

We took a risk, made a bet, and brought you along for the journey – and in the end we did not deliver what we intended. Now our goal is to make it right, and to take our learnings from the past year to guide you down the best path for your IoT product or project.

Xenon devices and Particle Mesh networks that have already been setup or that are setup before the end of year 2020 will continue to function normally with access to the Device Cloud and our existing device management features. The timeline is as follows:

If you would like to continue exploring mesh networking with your Particle devices, we’ve outlined ways to do that below. The full roadmap can be found here for reference.

Other ways to use your Xenons

There are a few ways to continue exploring mesh networking with your Xenon development board as well as accessing OpenThread. You’ll find more documentation on how to do so here.

Use your Xenon for Bluetooth Low Energy: You can continue to develop with Particle’s Bluetooth Low Energy APIs as long as you activate your Xenons before the end of 2020. Keep in mind the last Device OS to support Particle Mesh will be released in March, so these devices cannot be upgraded beyond that version. You can also use the Xenon disconnected from the Particle Device Cloud (manual mode) to act as a BLE end point, though it must be flashed via Workbench or the CLI tool and does not include OTA capabilities. More information here.

Develop on OpenThread SDKs directly: You can access the Nordic nRF52840 SDKs to develop with OpenThread’s mesh networking protocols. This will require a third-party gateway and will overwrite Particle’s Device OS. More details here.

Looking forward to what’s next

Deciding to end development and support of Particle Mesh was a difficult, painful decision. Our mission is to reduce the barriers of developing and bringing to market IoT products, and we have failed in that mission here; we have given you a path and allowed that path to end.

But the silver lining here is that this decision frees us up to invest more deeply in the technology that we’re most excited about – cellular connectivity for IoT.

We are strong believers in the future of cellular IoT. Since the launch of the Electron in 2015, more and more of our customers have been using our cellular connectivity platform to do everything from monitoring heavy equipment to tracking the location of electric bikes and scooters. Cellular is great in large part because “it just works;” if your device is near a cellular tower, it connects out of the box. That’s it. Yes, developing a cellular product is complicated by telco relationships and nasty certifications and by a complex and esoteric networking stack – but that’s where we come in.

We’ve already made it possible to build 2G, 3G, and LTE CAT-M1 connected products with Particle. We’re now working on support for additional LTE radios to provide global LTE coverage and better performance. We’re doubling down on our most powerful features – over-the-air firmware updates and device diagnostics – and we’re working on new solutions specifically for mobility and asset tracking, which have become some of the most common use cases for Particle.

There are more great things to come from Particle, and we look forward to sharing them with you soon. Stay tuned! 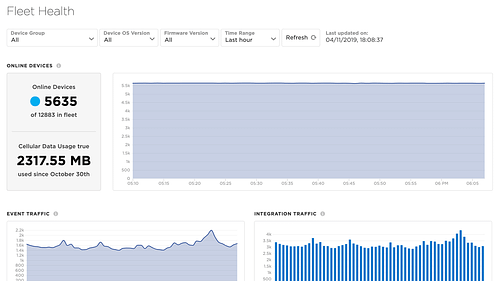 View all the mission-critical metrics that matter most to the normal functioning of your fleet.