Last year, IoT was on the verge of an autonomous driving revolution. It didn't happen. Here is what actually happened in 2018 and will happen in 2019.

This article was originally published on DZone.

At the beginning of 2018, it felt like the IoT industry was on the cusp of a technology revolution. Autonomous driving was a huge topic of conversation in IoT.

Today, it seems like we are further from making autonomous driving a reality, as it turns out self-driving cars aren’t yet road-ready. Before self-driving cars can be deployed, the logistics of our roads, cities, and infrastructure need a lot more work. Eventually, the technology behind these vehicles (sensors, LIDAR, etc.) will allow cars to make better decisions than humans, but we’re just not there yet.

In the meantime, that leaves us in an uncomfortable reality where the problems of urban traffic have gotten worse. Lyft and Uber were supposed to take cars off the road, but instead they’re making traffic worse; we’re taking cars instead of public transportation. More cars means more traffic.

Enter the biggest IoT surprise in 2018: connected scooters and bikes. When traffic gets worse, the only solution is to get out of traffic – and it turns out that our bike lanes are underutilized. Scooters have gotten a lot of crap for the behaviors of their riders (no helmets, riding on the sidewalk, parking scooters in front of wheelchair ramps, etc.), but their popularity (and massive funding) stems from a real-world problem: traffic is getting worse and shows no signs of getting better unless we make some massive technological changes.

The broader trend that these connected vehicles represent is combining connectivity and commodity hardware to come up with unique and creative solutions to huge problems. I expect we’ll see this kind of creativity continue through 2019, and we will continue to be surprised by the out-of-the-box thinking of IoT innovators and entrepreneurs.

“Traditional industries” – which is to say, the businesses that have been around for decades – are natural homes for IoT. If you make pumps and valves, you can use IoT to make “smart” connected pumps and valves, and create new lines of business as a result. Over the course of 2018, investing in IoT went from “probably a good idea” to table stakes in these industries. We’ve seen innovators in manufacturing organizations solving real world problems with IoT and defining clear use cases. As knowledge and skills are shared, we’ll see faster adoption of IoT in areas such as oil and gas, manufacturing, and other long-standing traditional industries.

It’s no secret that the world’s largest companies have been investing in IoT, but, for the most part, they don’t have the technical competence to execute IoT initiatives at scale. These companies will, or should, look to acquire smaller startups with deeper technical IoT expertise. I don’t expect we’ll see a lot of $3 billion acquisitions, but instead many acquisitions of smaller size (~$1 and scale (~$10M)) that are intended to build the teams to drive the organization’s IoT initiatives for years to come.

We will see more scooter and bike sharing companies deploying fleets in 2019 (and more cities will try and kick them out). As the larger traffic problem persists, expect to see other surprising vehicles as well. Tiny cars! Hover skates! This also means city managers and local politicians will have to get smarter about infrastructure and be in tune with the tech coming into cities. On the flip side, expect to see fast-scaling scooter and bike sharing companies work more closely with cities so they don’t get regulated out of markets.

The industry continues to make strides with IoT security, and new IoT devices are much more likely to have at least basic security in place. However, there are millions of IoT devices still in the world that are insecure – and those devices aren’t going anywhere. That means existing IoT businesses are vulnerable, and despite the industry’s best efforts, there are likely to continue to be major breaches. These breaches will create uncertainty in the market that will force IoT practitioners to both double down on their security investments and to increase their marketing focus on the value of security and data privacy.

In 2018, the west coast is on fire and the east coast is drowning. For years, we’ve seen companies building connected sensor networks to monitor the effects of climate change. Now that the costs of climate change are becoming more obvious, expect to see investment in using IoT to manage the natural disasters that are getting worse as a result of our shifting climate. Flood prevention and fire abatement will likely be hot topics in IoT for the next year and beyond. 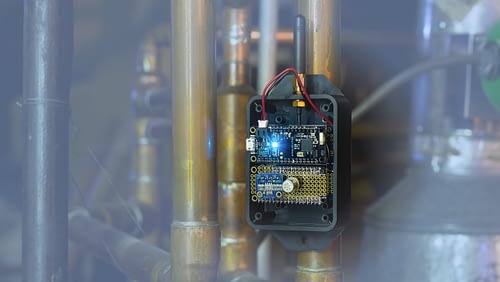 Learn what motivated us to built Particle Mesh and the all new Argon, Boron, and Xenon devices.